Should You Disinherit Your Heir? If So, When?

While disinheriting an heir is nearly always a difficult decision to make, laws that govern property conveyance make it an even more difficult process to complete. You've worked hard to build the wealth 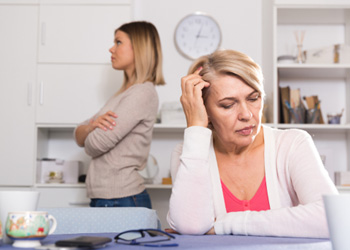 you have today. You want to be able to pass that on to your loved ones in the future. But what if some of them aren't worthy of inheriting it? Should you disinherit someone?

You might think so, especially if you feel they are not prepared for it and would likely squander the money away. But there are things you may want to consider about leaving someone out of your will entirely Before making the decision to write someone out your Will, take a moment to consider the potential benefits and consequences of doing so.

What Does It Mean to Disinherit an Heir?

When a parent disinherits an heir, it means that they are removing them from their will.

Disinheritance is a big decision and one that should be made with care. Although it might seem drastic to take away your inheritance, there are several reasons why it might make sense for you or your loved ones:

While disheritances are warranted in certain cases, it may be unwise to do so in others. First, understand that a disinheritance will normally result in devastation to the parent-child relationship, and can even affect the disinherited’s relationships with those siblings who do inherit. Second, disinheritances are often contested in the courts, after all the disinherited has nothing to lose and everything to gain. However, some people disinherit in less hostile situations. For example, if a couple has three children, and Child 1 is very wealthy; these parents may advisably disinherit Child 1 so that Child 2 and Child 3 receive larger inheritances. If you are considering doing this, it is important to keep in mind that the disinherited’s financial status is subject to change in the future.

Some people choose to leave an heir a nominal amount of inheritance. This sometimes amounts to $100 or even $1. Often this sort of conveyance results in anger, confusion, and conflict for that beneficiary which may invite challenges to an estate plan which may be worse than if a complete disinheritance is made.

Tell Your Children, Even if They Won't Inherit.

If you are planning on disinheriting someone, you should tell them about your plans first. This gives them the opportunity to discuss why and can help avoid conflict later on.

If they object to being disinherited, then try working out a compromise that is agreeable for all parties involved. This could mean changing the terms of the inheritance or giving more money than originally planned (perhaps in exchange for taking over some of their responsibilities). If none of these options work out, simply proceed with disinheriting your child.

For the most part, disinheriting your child isn't a decision you should take lightly. You may have to deal with some backlash from family members, and it is possible that your child will be upset as well. However, if you are ready for this step and feel it's in everyone's best interest, then proceed forward with confidence.

You may also want to consider the tax implications of disinheriting a family member. While you can leave your estate to whomever you like, and no amount of money or property will be taxed as long as it's under $12.06 million in 2022, there may be some tax consequences associated with disinheritance. If your estate is valued at more than $12.06 million (or $24.12 million if you're married), the IRS may require that it pay federal estate taxes when your assets are passed down from generation to generation.

To avoid this charge, you can gift up to $16,000 per person yearly to reduce the taxable estate and in turn reduce the estate tax liability. This type of provision requires careful thought and planning on behalf of everyone involved, so it is best to visit a qualified legal counselor or financial representative before making any final decisions about who gets what in terms of money or property.

Disinheriting an Heir May Have Unintended Consequences

Let's say you decide to disinherit your son because he's been unfaithful to his wife, and you do not want him to benefit from your estate. But if he contests the will, he might still end up with some of the assets that were supposed to go elsewhere. And if an heir contests a Will, they may win back some or all of what was intended for another beneficiary. At the very least, it would likely lead to estate assets being dwindled during the defense of a will contest. Although it is rare, it is not unheard of for contests to last years or even decades in court.

Aside from this potential legal battle over who should receive what share of an estate, disinheriting someone can cause severe emotional stress in family relationships—and   potentially forever ruin close family relationships. The pain caused by feeling unwanted or unimportant does not subside after death; it takes its toll on everyone involved and may last years.

Disinheriting a child is an extreme measure that should only be used as a last resort. If you have the means to help your child but are unwilling to do so because of some past transgression or other issue, consider giving them a smaller amount instead of nothing at all. Also, keep in mind that disinheritance may not stand up in court if challenged by another heir.

Your family relationships may be damaged by the contents of your Will, so think carefully before deciding who gets what.

Family relationships are important, so you should make sure that before deciding who gets what in your Will, you have considered how it could affect them. It is possible for someone to be disinherited without realizing it. For example, if a person believes they have been named as an heir in their parent's Will but are not, this can cause a lot of confusion and upset.

Another way family relationships can be damaged by disinheritance is if one child gets more than another child from the same parents. This can cause resentment between siblings which may not have been there otherwise.

Disinheriting an heir is also not without its drawbacks.

An heir who has been disinherited may be inclined to contest the Will, which can lead to additional legal costs and delays in probate. If your reasoning for disinheriting them is because you believe they are not responsible enough with money or that they spend too much, this could backfire if they contest the Will and it becomes public knowledge.

In addition to these issues, if someone feels slighted by being disinherited or even just hurt by your decision to leave them out of your Will completely, that person may feel as though their relationship with you was not as important as it should have been - even if you had no intention of hurting that person’s feelings when making this decision.

5 Consequences of Disinheriting an Heir.

If you do decide to disinherit an heir, you are able to leave the inheritance to someone else. If you have children, they may not be in their best financial position when it comes time for your estate plan. Or maybe they just don’t want your money. This is a great way to avoid those awkward conversations about who will get what and why (and then having everyone see through your motives).

5 Reasons You May Want to Disinherit Someone.

If you feel that disinheritance is the right decision for you and your family, there are alternatives to this option that you may want to consider.

It is also important to remember that disinheritance can have an impact on the rest of your family. If one child is cut out of the will and their siblings are left with most of the inheritance, resentment may develop between them over time.

With proper legal counsel, properly executing a disinheritance is possible, but be prepared to make some tough decisions along the way.

Disinheriting a child, sibling or other family member is an emotionally difficult decision to make. You should seek legal counsel for assistance in making sure your wishes regarding an inheritance are carried out properly. If you do not want to disinherit someone, but still want them to have nothing when you die, consider buying a “Generation Skipping Trust” (GST). A GST allows you to defer inheritance for your children and make it available for the benefit of your grandchildren or great-grandchildren. A GST is a trust that you can set up to skip a generation. It allows you to transfer property into the trust and control how it is distributed.

You can set up a GST to skip as many generations as you want, but it must be in place when you die. Once the trust is established and funded with assets, no one else can access them without consent of the Trustee.

Disinheriting Someone May Be an Option for You but Should Be Taken with Caution.

Disinheritance is a last resort and should only be considered after other options are explored. While disinheritance may help protect your estate, it can also cause family conflict, which is never good. If you decide to disinherit someone, make sure you consider all of the factors involved so that you can make an informed decision about what's best for everyone involved.

If you need help managing your assets or making decisions about how to distribute them after your passing, don't hesitate to reach out to a lawyer near you who will give you advice on what you need to do next.

How to legally disinherit someone.

If you have any doubts about the legality of your document, see if it can be strengthened or rewritten. It is best to go over all the details with an attorney who specializes in estate law before executing it (which should happen only after careful consideration), but here are some things to keep in mind:

I hope that you have a clearer understanding of what it means to disinherit someone and when it might be beneficial for you. Whether or not you decide to do so, I would like to leave you with one thought: family relationships are precious and should be preserved at all costs. The choice to disinherit is always one of great significance that deserves great consideration. As mentioned before, the effects are nearly always catastrophic to family relationships. If you are weighing the decision currently, give Jesse A. Block and the Kennesaw-based Block Law team a call today at (770) 387-4259, and let us help you to make the best decision for your family’s future.

What You Should Know if You are Managing An Out-Of-State Probate A Call to Action Take Control of Your Estate Plan Maintaining Autonomy As A Caregiver Should You Disinherit Your Heir? If So, When?